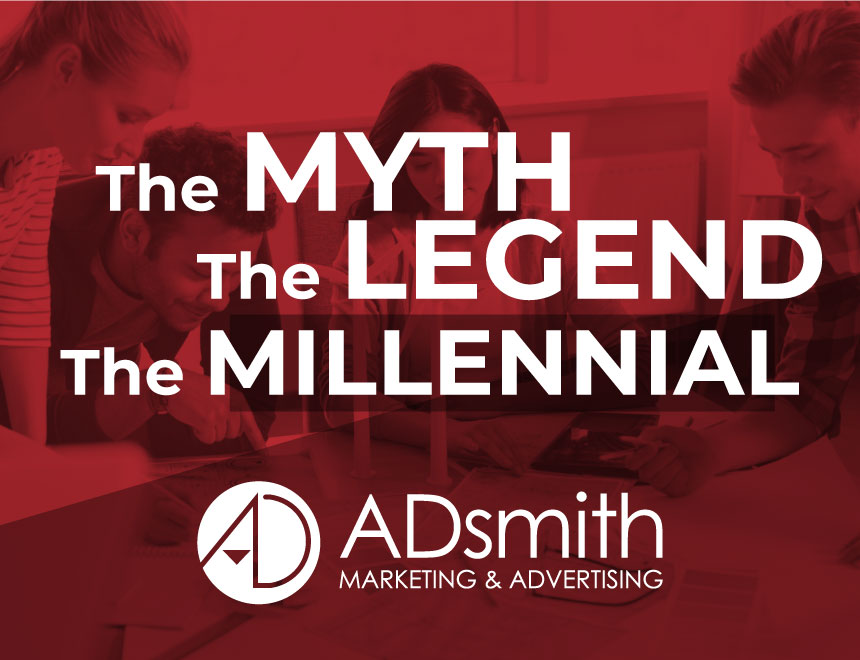 Dissing Millennials is a popular pastime. They’re lazy, they’re entitled, they’re narcissistic—the list goes on. Well, ADsmith can’t speak for all Millennials, but the ones who work here are nothing like the stereotypes.

Let’s start by defining Millennial, as it seems to be the catch-all phrase for “young person.” Millennials are the generation born between 1981 and 1996, which means the oldest Millennials are knocking on the door of age forty. Those Millennials who were born in the early-to-mid 1980s experienced childhood in an analog world; the advancements in technology and boom of the internet age occurred when they were still learning, which made them fast adapters to the modern digital era. For those Millennials born after 1985, technology was a way of life—another tool for learning and growing, and, yes, to a degree, understanding internet culture in ways the older generations do not. This understanding is crucial for companies and brands in today’s digital world. To make the most of your digital adspend, you have to understand the culture.

But we’re getting ahead of ourselves. Let’s go back to those stereotypes.

Millennials are the first workforce generation to grow up in a digital age. They grew up in a world with information at their fingertips in ways previous generations could never anticipate. This instant info-access informed not only the way they learned and studied, but also what their lives looked like outside of work or school.

As technology evolved, so did opportunities for those entering the workforce. Not only did it change how daily work tasks were tackled and completed, it changed the way people thought of work. Office email, cell phones, cloud technology, and much more has made working off-site (while still producing quality work) more viable an ever. This sort of flexibility, something not experienced by older generations, can be misconstrued as laziness.

“I don’t use busy-ness as an excuse to not get something done,” said one ADsmith Millennial (age 23). “You can pretty much do anything if you work with others, make a prioritized task list, do work, and stay focused.”

The Millennials at ADsmith have proven, time and again, to be anything but lazy. The Millennials in our digital department have been known to spend their free-time acquiring new Google certifications. No one asks or expects them to do this—they just do. And the more knowledge they gain from Google, the better ADsmith can serve our clients by building informed strategies and making educated recommendations.

ADsmith’s video department is almost entirely comprised of deadline-driven Millennials who routinely come in early and stay late and are committed to ensuring every video produced isn’t just good, but is also national-quality work. It’s this commitment to their craft that led to ADsmith winning three Telly Awards, the most prestigious recognition video and television can receive in the United States.

When people talk about Millennial entitlement in the workplace, they are typically referring to the following behavior:

The dynamics of many workplaces had changed by the time Millennials exited college and began applying for jobs. According to an article published by Millennial Marketing, 68% of hiring managers in 2015 believed that Millennials have skills that are not shared by prior generations. This was a subtle but key turning-point in the cultural narrative, and the first time in history that the less experienced workforce had knowledge that the more experienced workforce did not. Millennials who had been raised alongside emerging technology were more fluent and quicker to adapt than older generations—a phenomena that may well become the new normal, as technology isn’t slowing down.

An ADsmith Millennial (age 24) reflected on her experience at a previous workplace, where she was routinely overlooked for advancement.

“[My bosses] said because I’m a Millennial, I just feel entitled to a raise and promotion,” she said, regarding the experience. “I felt I had earned it. I picked up the slack, took on more hours, covered shifts, took on more workload because once they saw that I could do a lot, they cut shifts to use me more. I even trained people. But they used the stereotype of entitlement as one of excuses to not move me up.”

Most of the negative stereotypes surrounding Millennials have narcissism at the root. The more narcissistic you are, according to the Greater Good Magazine, the more likely you are to view yourself as powerful, important, and attractive. As the Greater Good points out, high self-esteem and well-being are traditionally linked to narcissism—and are often referenced by those who paint Millennials as the true “me generation.” On the surface, it’s easy to see how people might reach this conclusion. “Selfie” is now a word you can find in the Dictionary, after all. When it comes to charity, Millennials are outspent each year by both Boomers and Generation X, according to TheStreet.com.

However, while the amount of money given might not be as great, the volume of Millennial donors (84%) outpace both Boomers (72%) and Generation X (59%). Overall, charitable donations themselves are at a decline; a study conducted by Indiana University’s Lily Family School of Philanthropy marked a 12% drop in charitable donations from 2003 to 2015. And while contributions have declined over the last few years, Millennials are giving what they can when they can in greater numbers than older generations.

This is something we see reflected in the ADsmith Millennials as well, with numerous Millennials dedicating both time and money to local not-for-profits. We have a Millennial on staff (age 36) who has served on numerous committees for fundraisers around town, and, alongside another ADsmith Millennial (age 34) shaved her head to raise money for the American Cancer Society. These ladies aren’t the exception to the rule and activism isn’t a work requirement, rather something our Millennials do happily.

At ADsmith, we also see a trend among Millennials to prioritize themselves last when it comes to assisting others.

“I am very bad at saying no to someone asking for help,” said an ADsmith Millennial (age 24). “I may already have an overflowing to-do list but if someone at work asks for help on a project I will make the time. Even if it means skipping lunch or staying a little late, I don’t like other people feeling overwhelmed or burdened by something if I am capable of providing some sort of pressure relief.”

It is a rite of passage among each generation to look down on those that follow them. This isn’t surprising in a world with ever-advancing technology, society, and access to education. Boomers received no shortage of scorn from the Greatest Generation, and before long, we’ll live in a society of aging Millennials bemoaning the work ethic and values of Generation Z.

“Our parents were ‘crazy hippies’ that couldn’t be taken seriously and every new group of 20-somethings hears some form of this as they start their careers,” said an ADsmith Millennial (age 36). “We have all met or worked with people who could be categorized as lazy, entitled, or narcissistic but I have not noticed that those people fall into any one age group.”

Most people understand the negative, sometimes harmful consequences of stereotyping, and how they impact people of all ages and backgrounds. As a business and work-home to numerous hardworking Millennials, ADsmith strives to not only challenge the stereotype but create an environment where team members of all generations can thrive and advance, without superficial things like age and gender informing our perceptions of what our teammates can achieve.