It’s no secret that the digital age has revolutionized the way we think about and consume media. After all, the advantages are numerous and a little bit of money can stretch a long, long way. As a result, many businesses may debate the value of investing their marketing dollars in traditional media, especially when it seems the rest of the world has shifted to getting their news and other relevant information from a strictly digital platform.

You might have noticed that 2020 has been anything but a business-as-usual year. While stores are reopening and people are slowly, if not cautiously, returning to their routines, the coronavirus pandemic hammered in just how much people still rely on traditional media. Networks saw a dramatic spike in viewership in terms of both news programs and entertainment. And brands were paying attention to the fact that audiences were paying attention—how many of us saw some version of a “We’re In This Together” message? Or any spot referencing the pandemic, social distancing, essential workers, medical personnel, for that matter? Those brands scrambled to put out relevant messages because they knew people would see them. 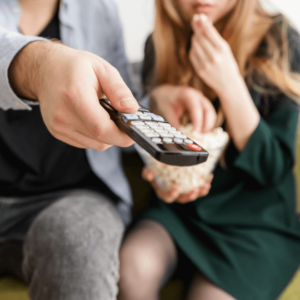 With all the talk about reaching Millennials and Gen Z, it’s easy to forget there’s a rather sizeable portion of the general population whose media habits differ from the younger generation. While not averse to digital marketing, older demographics continue to rely on traditional media for both information and entertainment. Older Millennials, Gen Xers, Baby Boomers, and the Greatest Generation have a considerable amount of buying power, so it’s worth the effort to reach them.

In the olden days, selling your brand was as simple as throwing a commercial on television. Whether you had a new business, a promotion to run, a new product or service to unveil, or just wanted to remind customers of all you do, thirty seconds of carefully selected airtime was all it took to reach a broad audience. These days, obviously, it isn’t that easy (and to be fair, it didn’t seem that easy then, either), but television still plays a key role in the customer conversion process. How do we know? Because we can see in real-time an increase in web traffic to a company’s website when they have a traditional spot on the air. This tells us that people are watching and, more importantly, responding to what they’re watching. Your thirty seconds of carefully selected airtime might not be all it takes to get people in the door anymore, but it is a crucial component in their overall buying process.

4. What even is traditional anymore?

The line between traditional and digital media is blurry at best, and getting blurrier by the minute. Sure, cord-cutters aren’t watching as much traditional programming (more on that below), but they are still watching something. Subscription-based platforms, such as Hulu, are only increasing in usage, and while the commercial breaks on said platforms don’t look like the ones from yesteryear, they are still essentially serving that function. There’s even a term for it—OTT (over-the-top) advertising, commercials that are placed to run on digital platforms but in a method that remains, by and large, traditional.

Even cord-cutters have those events that they must watch live, whether it’s cheering for the Chiefs, following the US’s progression in the Olympics, watching a bunch of A-listers compete for that year’s Oscar, or just catching the news. Everyone has something they absolutely must watch live, and as long as that’s true, traditional media will remain an important part of the media mix.

One of the many, many benefits of comprehensive marketing is the ability to view and analyze the full picture and see how traditional media complements fits in with your objectives. Connecting all the dots across all platforms allows us to leverage your message and the means by which it is delivered for best possible results. If you have questions about how traditional media can impact your messaging, give ADsmith a call. We’re here so you can be heard.